In our current ‘Culture Shift’ teaching series we’re exploring our new core values at Rayleigh Baptist Church. Last Sunday we continued with Participation [you can watch the talk here…]

“We value Participation because nobody’s perfect, but everyone’s welcome and together we build God-centred communities” 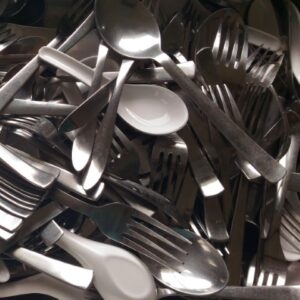 Please indulge me for a moment, and join me for a journey through my Nan’s cutlery drawer. I remember when I was younger watching in awe from beneath the level of the drawer as she baked & prepared meals. Then, when I could be trusted(!), I was sat on the unit and got my first glimpse into the almost magical drawer. It was an interesting place, with some sections perfectly in order, and others seemingly without any kind or organisation whatsoever. There were more types of knives and spoons than I even knew existed – some for a particular purpose, but most were for general use. The forks were mostly pretty standard, ordinary even. Then there were the utensils, many of which to this day I still don’t know what they were for.

In 1 Corinthians 12 the Apostle Paul, the greatest Missionary and the most prolific New Testament writer, talks about Spiritual Gifts and presents a picture of the Church as a body. It’s such a rich image with an amazing depth of meaning which is helpful as we think about what it means to be Church (I encourage you to read it again, however well you know it). I want to suggest that we have a similarly rich picture as we venture into my Nan’s cutlery drawer (and perhaps your own) and reflect on what it might teach us about our fourth core value of ‘Participation’.

(aside: how Nan managed to keep her tin opening in service I’ll never know – we’ve had more tin openers than we’ve had years of marriage)

What does this have to say about our shared life as a Church and our participation in a common mission? Using Paul’s picture of the body, we can immediately recognise that if a part of the body is missing or unable to function, we might just be able to get by but it would be more of a struggle. Back to my Nan’s kitchen, imagine you’re trying to eat a bowl of delicious soup. No soup spoon? No problem. A teaspoon would work, though it would take longer. A ladel would work too, though it’s like to be messy and miss some of the content of the bowl. In the unlikely event that there was no spoon with which to eat a bowl of soup, we might be able to find another piece of cutlerly to use as a stand in. But if you’ve ever tried to eat a bowl of soup with a fork or a knife, you’ll realise the value of having the right tool for the job. It would still be possible to eat the soup with a fork, but you’d waste an awful lot of time and effort, and you’d miss much of the enjoyment as the soup grew colder with each passing minute.

[and if you were thinking ‘just pick up the bowl and drink the soup’, that’s exactly the kind of attitude we want to foster! But it misses the wider point in this metaphor…]

Paul said there are different kinds of gifts & service, given by the Spirit as He determines for the common good; he also said there are many different parts of the body put together just as God wanted them to be, each with their own function, but each connected and called to work together.

If God has called you to/placed you in Rayleigh Baptist Church, He has a purpose in mind for you. Whether you are a pristine soup spoon, a slightly bent fork, wooden spoon that’s been worn down by years of service or a tin opener that needs a little oil or sharpening, God has a purpose for you here – you’re part of His plan for RBC and the wider community.

And if you don’t do the thing that He’s placed you here for, someone else might be able to step in or step up and have a go, but then they’ll be doing what God has called you to do, and they may have to leave undone the thing God has called them to do.

We all have something to contribute – and nobody’s perfect, so everyone is welcome as we seek to work together obediently following God’s lead and building according to His plans and purposes. As we start to regather, we’re excited to see people stepping back into their previous areas of service within the Church, and stepping up into new areas of service within and beyond the walls of the Church.

Whatever you do, please don’t be a soup fork…